IT is not exactly my olive oil estate. But it feels like mine. Because every July, when daylight stretches across the Umbrian landscape until 9:30 p.m. and the smell of fresh figs — roasted with Gorgonzola, wrapped in prosciutto, of course — wafts from the villa’s two kitchens, you can find me, glass of prosecco in hand, holding court with my friends at the top of my own little mountain.

I play the gracious hostess, inviting an ever expanding group of friends to join me at my estate outside Perugia every year. I rattle off directions to my mountaintop with cool precision. “From Fiumicino, it’s about two hours,” I say authoritatively. “Once you pass Deruta on the E47, exit at Torgiano. Follow the gravel road to the top of the mountain. Oh, and bring wine.” 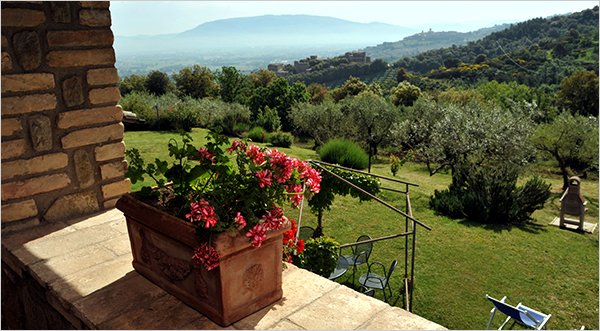 I’m so at home that I invite the real owner of the Montagnola estate, Vittoria Iraci Borgia, along with Carmela Guzzo, her factotum-cum-culinary-magician, and their families to elaborate multicourse feasts. When they arrive, bearing lovely gifts for the hostess, my friends and I sweep out to welcome them, the picture of gracious beneficence. We proffer Campari-vodka-grapefruit juice aperitivos, along with crostini alla Romana and arancini before moving on to the main feast as the sun starts to set.

Global recession? What global recession? If you don’t count discretionary spending (read eight pairs of shoes from the Prada outlet in Montevarchi), my dolce vita sojourn is cheaper than a week at many beach houses stateside. For 2,400 euros (about $3,400 at $1.42 to the euro) for the whole week, we rent the six-bedroom (each with private bathroom) Caprareccia, the simply furnished, staggeringly beautiful hilltop jewel of La Montagnola’s rental offerings.

Umbria is to Tuscany what Sonoma is to Napa — a little less trafficked, a little less touristy, a lot less money. It is dotted with historic cities and towns, from the imperious, intellectual Perugia, to the spiritual and high-minded Assisi, to the wine-lover’s paradise, Montefalco, home of sagrantino di Montefalco, one of Italy’s finest and most robust red wines.

The region also has a number of beautiful, yet simple and rustic agriturismi (farm rentals) that are available by the day or by the week. These range from rooms in farmhouses to large villas on vineyards to country house estates, like mine. They are, by and large, far less expensive than a hotel, with the added benefit of the freedom to sleep late and eat breakfast when you want, shop in the local markets for artichokes and try your hand at Italian cooking in your own kitchen. It’s a great way to play house (well, play villa) with friends.

I found my own villa back in 2003, through Vittoria’s cooking class at La Montagnola, her family’s 1,500-acre olive oil estate 15 minutes south of Perugia. It was a gloriously hot day, and we made stuffed tomatoes, white pizza in a wood-burning oven, and biscotti. The rest, as we say in Italy, is la storia.

After the class, Vittoria took us up a gravel road. We bounced past row after row of olive trees, their jade-tinged branches brushing against the car. Around a bend, a picnic table sat awaiting the olive pickers who would be coming at harvest. The landscape felt like a nature preserve. Finally, at the top of the mountain, we arrived at Caprareccia.

I stepped out of the car, mouth agape. Two peacocks were strutting to the far end of the swimming pool, pondering the panorama before them: gently undulating olive hills, a medieval castle in the distance, a scattering of sienna-tiled rooftops, the spires of Assisi in the distance. Behind the pool stood Caprareccia, its windowed shutters closed to keep its rooms cool in the warm midday sunshine.

A hedgehog scurried between two rosemary bushes before disappearing. “How much?” I croaked. Vittoria’s reply — 2,400 euros, or 400 euros per bedroom for a whole week — had me babbling instantly:

And mine it has been. Every year, my friends and I uncover a little more of the shine of our mountain and valley and the area’s towns. Last year we discovered that the deli section in the hypermarket in San Martino has roasted pigs, which when enjoyed with a crisp Orvieto Classico on a picnic table back at our villa, can go a long way toward helping one uncover the meaning of life.

We have learned the best restaurant for dinner with a view — the hilltop Osteria I Birbi, just outside Torgiano, where we can sample bistecca alla Fiorentina on the patio. The best drive: along Lago Trasimino through San Savino at sunset. We investigate just about every single zucchero bowl that Deruta, the heart of Italy’s pottery industry, has to offer, and then decide that, actually, we prefer the sugar bowls at the pottery place in Torgiano, the village down the mountain from La Montagnola.

We take day trips: hillside drives to Montefalco for sagrantino, Montalcino for brunello, and even to Torgiano, where the Lungarotti vintners turn out the easy-drinking Rubesco Rosso di Torgiano. We walk down to the village for ciabatta and pecorino, to visit the butcher for pork chops, and then call whoever is back at the house to come get us in the car for the trip back up the mountain. I quickly learned to keep the car in first gear for the whole steep ascent.

We take evening trips: aromatic drives to Foligno for dinner at Il Bacco Felice, where we sample deep-fried rabbit and whole chicken cooked in what tasted to me like bacon fat. Sometimes we’re bold, and venture to Siena, an hour away, to sip Campari and fresh orange juice in the famous Il Campo piazza, or to Florence, two hours away, to visit David and haggle in the leather market. We make multiple trips to the Prada outlet; after all, can one really have enough shoes?

More often we idle the days and nights away on our private mountaintop, patio loungers scattered on the lawn around the pool, chilled wine resting on the side tables Vittoria has fashioned out of tree stumps. We watch the sun arc across the sky, listening to the sound of utter quiet.

We all love our Italian host. The guys love her because, well, she’s a hot blond Italian. The girls love her because she tells us where to find the spectacular Brunello Cucinelli cashmere outlet in Solomeo, or the La Perla outlet on the road to Assisi. We also quickly try to copy her style, and glide around in tight tank tops, flowy linen palazzo pants and flat sandals.

And we love our estate’s olive oil. “Taste this one,” Vittoria said during a tasting last year.

I sipped the cup. “It tastes salty,” I said.

Vittoria sniffed, dismissively. “Yes, that one is from Croatia, so it tastes like the sea. Me, I think olive oil should taste like olives.” She handed me another small cup of olive oil, this one from La Montagnola.

I sniffed, then tasted. It was fruity and spicy, triggering every memory I have of my yearly stays on the top of my Umbrian mountain.